Rwanda, By the Numbers

This past weekend, four of us went to Musanze (the Northern regional town) to visit a friend and explore the town. On Friday, we woke to very heavy rain and washed-out roads. Naturally, in true Rwandan fashion, we waited out the rain. Luckily, I hitched a ride with the Red Cross and didn’t have to brave a moto in the mud. The other PCVs weren’t so lucky and ended up having to trek through the slush/ended up muddy.

I caught an hour-long bus, around 11:00, to Muhanga and met up with the other PCVs. At this point, we had two route options: (1) Muhanga to Kigali to Musanze and (2) Muhanga to Miramuke to Ngorero to Musanze. We opted for the “shorter” and less traveled route, the one recommended to us by our Rwandan colleagues, option two! After four buses, an hour-long delay, and a heavy rain storm in a ghost town, we finally ended up Musanze and caught up with Brian (fellow PCV/sensei/guide). (Of course, this is after watching two grown adults vomit into their bags…not out the window, but into their bags full of stuff. EVERY TIME I GET ON A BUS.) 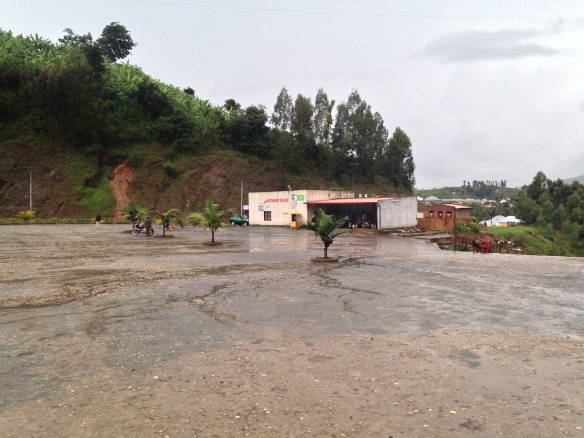 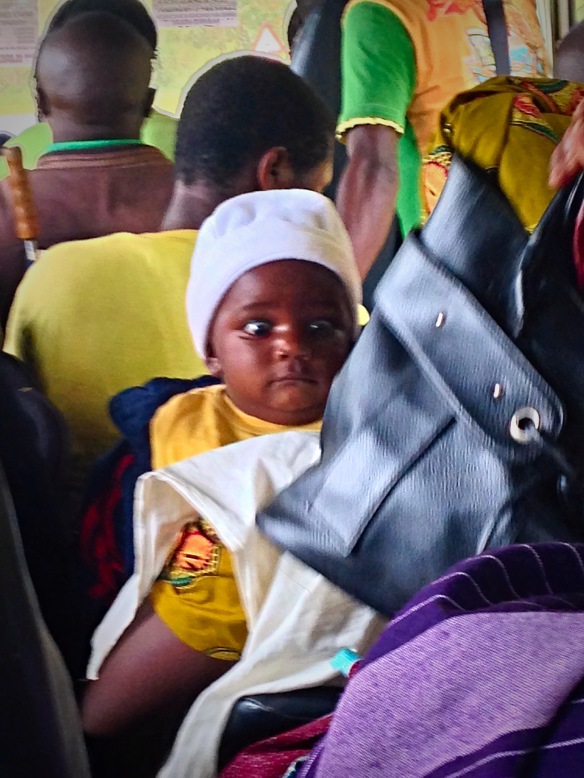 This wee little one was just as tired of traveling as we were.

That night, we went to Volcana Lodge and ate some stellar pizza. (Brian kept telling us it was the best pizza in country. It was definitely good, but I just think I’m not really a pizza person. It’s not my go-to.) The next morning, we had every intention of going to watch the Olympic qualifying bike race, through the mountain roads, but (of course) it started to pour. So, instead, we hid out at an ATM until the skies closed up and then went to get massages (I know, such a hard life we live). I passed on a massage, but got some quality bonding time in with the women who ran the salon.

After getting some grub at a nice little cafe (that we visited now less than five times in the span of two days), we went over to Brian’s friend house. Said friend graciously offered her (very nice) house to us for the night; she headed into the city and left the keys with us, so trusting I know. That night we jammed out hard to a 90’s playlist and played cards. After, we got to sleep in actual beds; it was tremendous.

The next morning, we gathered up our things and went back to the cafe (they had to be tired of dealing with us by this point) where we met up with two American girls (Mia and Tessa) who are in Rwanda for work/were vacationing in Musanze over the weekend. Brian had arranged for us to get together and take a taxi up to the peak of one of the mountains in Musanze.

La Paillot cafe, where we spent way too many hours and far too many francs…

By 11:30-ish, we were on our way down the mountain…on our little adventurous hike. At the very beginning of the hike, a lovely Rwandan gentleman came up to us and starting playing a homemade violin-type instruments. It was literally just a piece of whittled-down wood, two strings, and a shell. He played a couple of songs for us and then was on his way elsewhere; the sweetest beginning to our hike.

All-in-all, the hike took about three-and-a-half hours (much longer than the two-hour hike the super-trail-experienced-Brian had prepped us for). Of course, his daily norm is getting up at 5:00AM to trek around the mountains with gorillas. 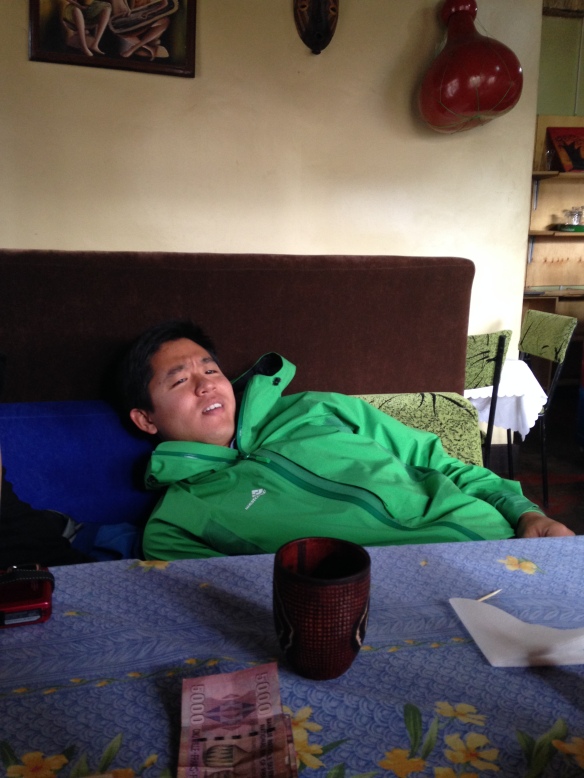 This is Brian, by the way.

The hike was stunning; no words (and honestly no photos) will do Rwanda’s beauty justice. Of course, that doesn’t mean I’m not going to try, so here’s what we got the opportunity to view last Sunday:

Along the way, we picked up some followers. In Rwanda, it’s very normal for children to wander anywhere and everything without informing their parents. Children as young as three (and sometimes just barely walking) are out and about on the weekends, breathing in the sunshine…and following abazungu (foreigners) for miles. As we walked, we thought – Hey, it’s Malaria Month – why not give them a little lesson on malaria net usage…and so we did just that. Of course, they just wanted our empty water bottles and some strangers to speak English (“Hello, teacher, how are you?”) to.

The little munchkins, playing jump rope, on the first part of our hike.

They could really be future GQ models, all posed to perfection on their own.

Around forty-five minutes in, we got a little turned around and ended up closer to the lake than we wanted (just because there was literally no walking path…all mud). It’s okay, though, because this lovely man in a boat directed us back to the walking path. After all, we couldn’t all fit in the rowboat. 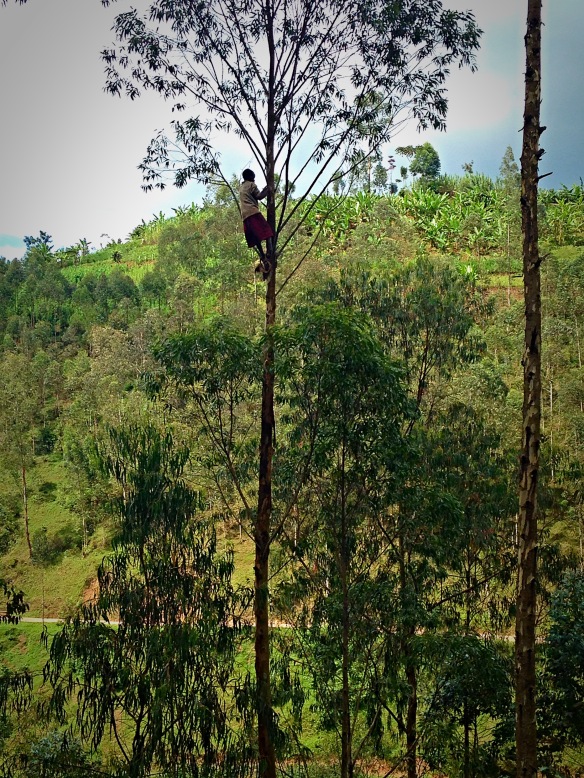 Fearless youngster, collecting wood to make a fire for dinner. 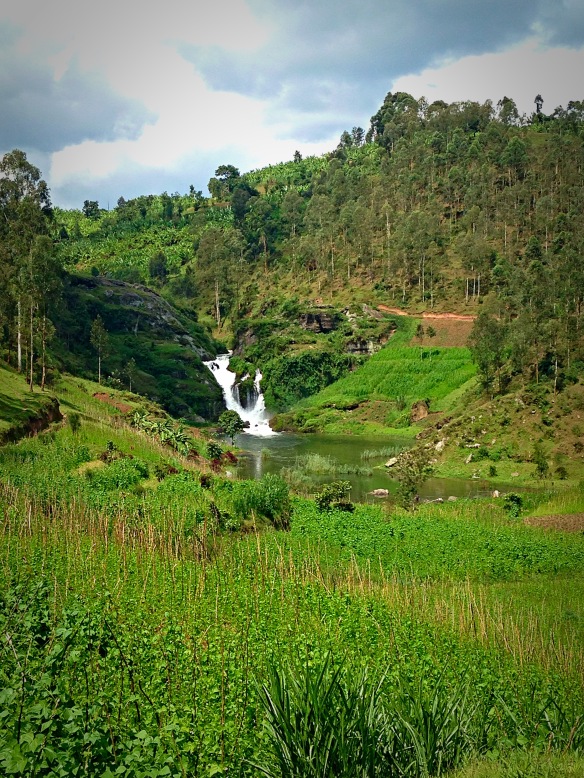 At one point, we stumbled upon the dam that powers a majority of the villages we passed through (since most houses might have a single lightbulb, at most, they doesn’t require a lot of juice). I was struck by the stark contrast between village life and the high-tech dam. Rwanda is big on hydroelectric facilities, so it wasn’t exactly shocking…but it was an in-your-face reminder of the differences that still remain between Rwanda and the fully developed world.

At some point, contractors abandoned the building in the background (not uncommon in Rwanda and probably due to a lack of funding). 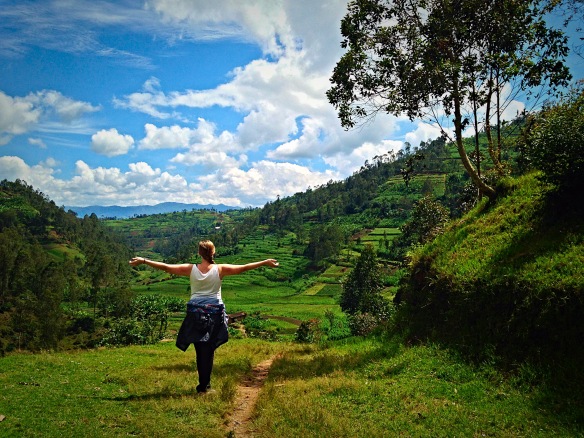 On Sunday evening, we began our return trip and purchased tickets for the 6:30PM bus to Kigali. As the minutes ticked away, more and more people started crowding the buses coming in and out. By 6:15, we realized that we were going to have to fight for spots on the bus (even though we already had tickets purchased). Thus began the most infuriating moments of my service.

As more buses rolled in to the bus park, dozens of people began running, shoving, kicking, to get spots on the buses. Imagine you’re standing in a semi-line, waiting for the 6:30 bus to show up and, when you notice it’s finally entered the parking lot, the fifteen to twenty strangers WHO DON’T HAVE TICKETS start moving, as a mob, toward the spot where the bus will eventually park. In order to get a spot on the bus (that you’ve already paid for), you know you have to move with the mob, too. As you do, you notice children are being shoved toward the bus entrance, infants are being passed through windows to “hold” seats for their parents, and grown men are elbowing women to get closer to the bus’ door. All the while, you’re wishing you could explain the concept of a line…though “ihangane” [“be patient”] is a classic Rwandan phrase, no one is being patient.

After a particularly harrowing event where a child was shoved to the ground by a grown adult, we went to the bus line’s office to complain (read: shout and scream about the chaos). In response, the bus line sent a man out to have us form two lines (one for the 6:00PM bus and one for the 6:30PM bus). As the 6:30 bus rolled in, the lines disappeared and people just started running toward the bus. Somehow, I reached the bus’ door first and held the non-ticket-holders off, so the rest of my group could get on the bus.

It was a disaster.