It’s been eight months since I left California. By the time I visit home next month…it’ll be nearly nine! Furthermore, I’m finally off crutches! (Except I’m not allowed to dance, hike, play sports, run, or go on long walks for another two months). Anyhow, to celebrate, here are some songs I’ve had on repeat:

One of the things I’ve come to realize about myself, since being here, is that I’m a creature of habit. I truly, truly enjoy organization and schedules. I’m just beginning to understand that I also enjoy the chaos that is living and working in a developing country.

Coming back from being in Kigali for so long (broken foot) and starting work again…well, it’s been difficult. In Kigali, time doesn’t really pass in the normal sense; you get to stay up well into the night and sleep in as late as you want, no staff meetings to mark the passage of time. It’s been a struggle, but I finally found a routine that works well for getting my constantly-tired-ass out of bed. 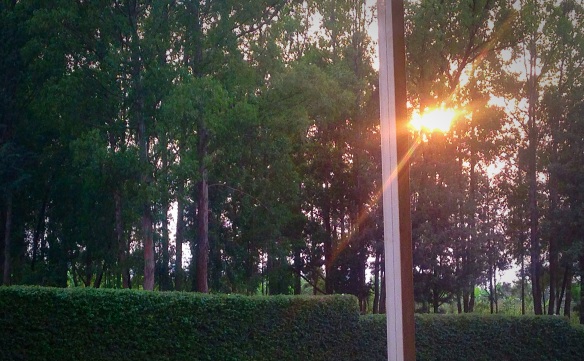 What a lovely post in the middle of sunrise.

I wake up between 5:15AM and 5:45AM Monday through Friday, at which point I start boiling water. (I’ve lived with cold bucket baths for eight months; times are a’ changing.) After the water is boiled, I add some to my french press, some to my bowl of oats, and some to my bath basin. I then promptly “shower” in the luke warm water, dry off, and spend no less than forty-five minutes sipping coffee, eating, and reading the White House’s daily press briefings, watching West Wing, or taking inane Buzzfeed quizzes…whatever peaks my interest. By 6:30AM I’m putting on my makeup, clothes, and getting ready to head out the door.

All of that might seem like a lot to you. But. As I said before, I need the structure. Otherwise, I’ll set my alarm for 6:30, get antsy about the thought of only having thirty minutes to get ready…then I’ll hit snooze and pass out again. One of the problems…or, rather, blessings in disguise…about Peace Corps Health (and typically every other program besides TEFL) is that it’s incredibly un-structured. Instead of getting dragged down in the fact that no one expects me to show up anywhere, at any given time, I try to stay focused on those 5:30AM cattle farmers screaming, “Mwaramutse (morning)” when they see me boiling water. And those 6:00AM church bells, loud enough to wake the dead. And the 6:50AM school children running circles around me, asking me to teach them English.

Of course, the best parts of my days are the chaotic, unscheduled ones. The hour that I’m forced to babysit a newborn while the mama undergoes post-birthing surgery. The three-hour staff meeting that I can only understand a lick of, but comprehend that we’re getting yelled at for lack of data reporting. The slip in the mud, in front of the school, because I wore sandals on a day that I knew – I just knew – that is was going to downpour on my way home. The cry session with my co-worker who just found out her mother passed away.

Fair warning: This rest of this post is not going to be chipper. You’ve been warned.

Upon getting to work this morning, I was told a very sad story of an infant in a nearby town. The story goes as follows:

It’s regular practice for the Health Centers to have one or two night-shift nurses. Just like in America, they work two or three nights in a row and then have an off-night/off-day. In this nearby town, that for anonymity’s sake we’ll call “R”, one nurse was working a solo night shift and a mother came in for an emergency delivery. After questioning the mother, the nurse figured out that the pregnancy was only in its sixth month. Without any other options, the nurse delivered the premature infant.

Upon delivery, the nurse was ill-prepared and assumed, incorrectly, that the nearest hospital was just too far a journey for the infant and the mother. Instead of calling for help, out of fear of being labeled ignorant or inadequate, the nurse waited for the child to die. There were no obvious birth defects (other than the small size, of course), but instead of caring for the infant…the nurse left the child in a trash bin, in the cold, and waited for it to pass away.

After waking post-delivery, the mother found out what the nurse had done and obviously panicked. She called the authorities and the nurse was arrested. She will spend her life in prison for her carelessness and ineptitude.

My point, in telling this depressing story, is that things like this are a crash course into reality. It’s easy to get caught up in the every-day here. Of course, horrors like this aren’t necessarily unique to Rwanda…or even unique to the developing world. But I still forget that not every area in Rwanda experiences the level of health care that my co-workers provide to Kibilizi. This morning’s story reminded me that, regardless of the safety net Kibilizi appears to provide, the health care system in Rwanda is still desperately in need.

On a similar, frightening, note…

Last weekend, one of my fellow Peace Corps Volunteers was poisoned.

The Volunteer was riding a bus back from Tanzania and was sharing a meal with another passenger. At the end of the meal, the passenger offered the Volunteer a small piece of candy. Given that sharing food is deeply engrained in East African culture, the Volunteer accepted.

As told by the Volunteer, he immediately felt drowsy and realized something was up with the candy. Incredibly, he had enough wherewithal to text his sister his GPS coordinates…and then promptly passed out.

When he woke up, his iPhone and iPad had been stolen and a concerned citizen had gotten him to a Tanzanian hospital, at which point Peace Corps Rwanda had become aware of the situation. Our medical staff was able to pick him up and bring him back to Rwanda, where he spend three days in and out of a heavy, poison-induced fog. His family had been informed right away and Peace Corps handled the entire situation with grace, if I do say so myself.

He’s already well on the road to recovery, but it was a scary situation nonetheless. And, again, it was a reminder that no matter how at-home we feel during our service…our differences still make us targets for things like theft. It was a rude awakening for all of us, I’m sure.

Aside from those two stories…the past couple of weeks have been pretty superb.

I spent the weekend in Kigali for a PAC (Program Advisory Committee) meeting and got to celebrate one of my best friend’s 23rd birthdays with her. 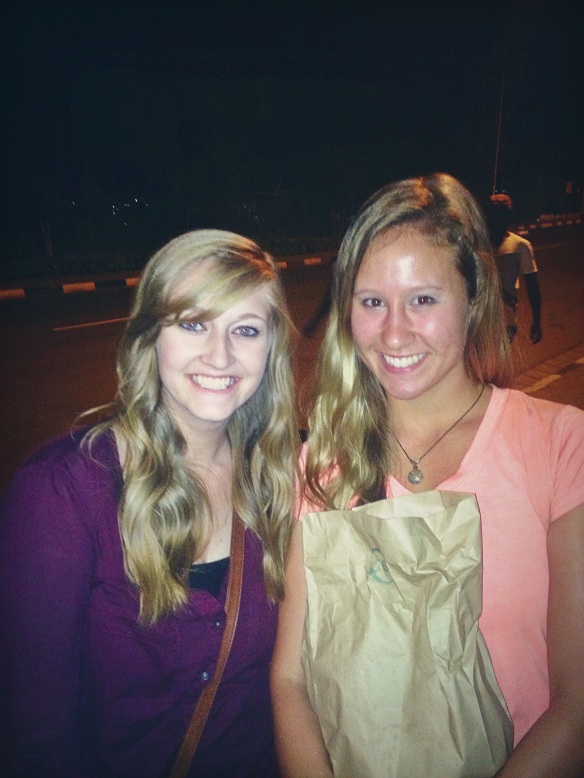 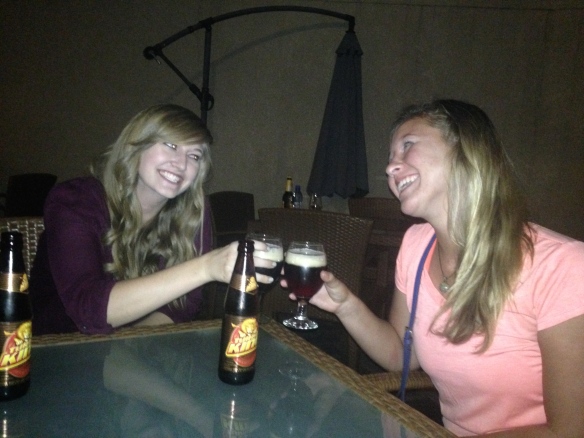 With the generous help of only three people, Kibilizi will be getting a television when I return from the States next month! I’ve already informed my Health Center staff and they’re stoked for the possibilities. Personally, I cannot wait to see the looks on the kids’ faces when we announce a monthly movie night. The weather is a bit cold right now (wet season in Rwanda), but when it warms up…I can imagine us in the outdoor waiting room, having a mini slumber party, watching kids movies with Kinyarwanda subtitles. I can’t wait!

I’ve been presenting the WASH hygiene and sanitation plan to a number of higher-ups in my area and, so far, the reception has been nothing but kind and supportive. I’m hoping this is a trend for future projects. I can’t stress enough (for future PCVs)…it all comes down to your bond with the community. If you show a good work ethic and take the time to meet all the proper officials, actually take an interest in getting to know them those first couple weeks, your service is likely to go much smoother!

Right now, my only struggle is site guilt. With all the grant work I’ve had to do, and the extended stay in Kigali, I’ve been away from work more than I’d like. Next month, I’ll be visiting the States and, though my supervisor has been more than supportive of my journey home to see family, it’s nerve-wracking to be leaving so soon into my service. I was always under the impression that I’d stay the full 27 months and not be able to return home (funds, time, etc.). Luckily, February is a down month…just a month of waiting for grant funding to get approved, so it’s the perfect time to head home for a vacation. It’ll only have been 9 months, but I feel like I’m already going to have to re-integrate a bit. I came into this journey not knowing what to expect; I didn’t know if I’d love or hate Rwanda. And, now, being so enamored with my new home…it’s going to be difficult getting used to Americans again. And Safeway…good god…Safeway is going to be a struggle. (Why are there so many toothbrush choices?!)

Until next time! (Which may be in the form of a blog update from America!) 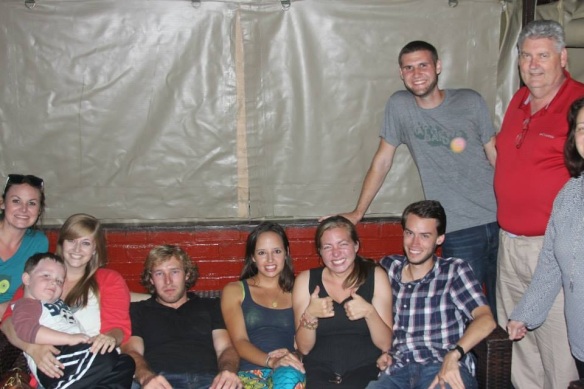 Matt’s (in the grey tee) family came to visit and a few of us got to spend some time with them. Absolutely fantastic people! (Had to try hard not to kidnap little Trip.) 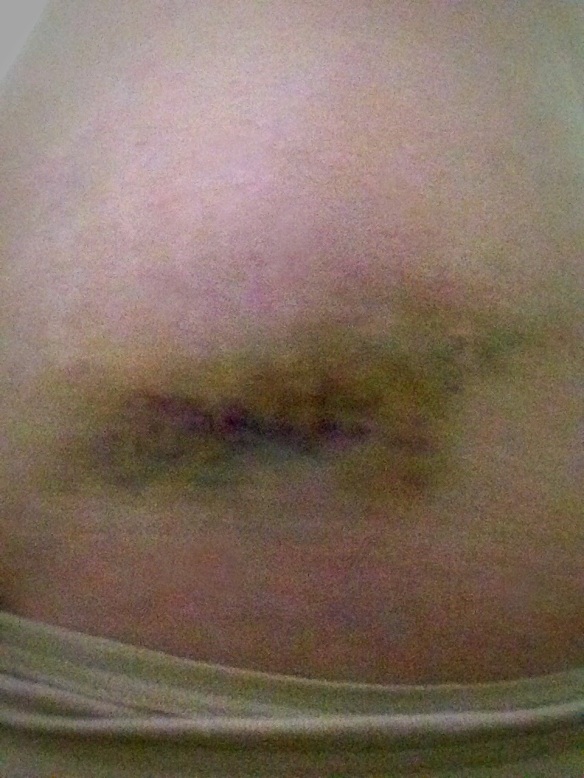