It’s been almost a month since I posted anything. Time passes in interesting ways during PST. The days either fly by, or you feel like you’re getting nowhere quickly. The beginning of July felt like it dragged on (endless hours of language instruction; technical training days that train you for little more than how to “treat” diarrhea). Let’s just say…we’re all over PST. But, honestly, my fellow trainees are providing more support than I ever could have imagined. I read a lot of blogs before coming to Rwanda. Most of them mentioned the drama and gossip that runs rampant through Peace Corps Volunteers and Trainees. To date, I’ve experienced very little (if any) of either of those things…I attribute it to the twenty-one other trainees in this Health 6 group. We’re all so diverse and unique…we’ve got an abundance of passion. I love it.

Moving on to the tangible things that have happened…

From July 9th to July 12th, we all went on “site visits”. We spent that time getting acquainted with our towns, health centers, new houses, etc. We all had very different experiences. Here’s where I’ll be living for the next two years (beginning August 23rd):

And here’s my potential house: 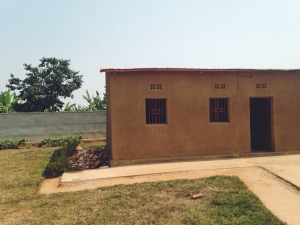 I say “potential” house because there are a number of safety concerns that Peace Corps will be addressing, that might result in me getting a change of housing. First and foremost, I had a very unpleasant interaction with the male “umukozi” (housekeeper). [He watched me shower, as a result of the bathing area not having a door lock.] Thank goodness I wasn’t naked; I had wrapped the towel around me, because I was pretty sure he would try something sketchy. Luckily, Peace Corps is perfectly willing to work with us in our housing requests, especially when safety is involved.

Other than Creeper Man, I really enjoyed my site. I lucked out (as did most of our training group) and I have electricity and running water. (Hopefully I will at whichever house I’m moved to, as well). I’ll be living in a small, ghost-town-like village just up the hill from a fairly large city, Kiramuruze. The weirdest part is how empty the entire village is. My Health Center is right across the street from the Red Cross and two NGOs. The Sector Office is right next door. There are a ridiculous amount of schools in the village, as well. Other than those buildings…the whole place is empty. There are store-fronts galore, and plenty of houses…but they’re all empty or boarded up. I’m not sure if it’s because the area is up-and-coming or if the area is one its way out. Either way, integration is going to be difficult. There’s just no one to integrate with. Bi baho! (Shit happens!)

During the site visit, we had a six-page checklist of things we were supposed to get done. On Wednesday, my titulaire (supervisor) and I headed to site. When we got to his house (located on my Health Center for the time being), I met his family and then we were off and running to complete my checklist. We crammed four days worth of activities into six hours because my titulaire had to leave for the Western Province as soon as we finished. I met the Executive Secretary (big head honcho of the Sector) and then toured the entire city/town/village. Our last stop was the Kiramuruze market which, as it turns out, is large enough that other volunteers in the area will be using it as their main shopping center. (Which means I get company more often!) That night, I watched a shitty Jean-Claude Van Damme movie with my titulaire because he lovvvess Van Damme. Even though my titulaire only speaks Kinyarwanda, we watched the entire movie in English. I was stoked.

I spent all of Thursday avoiding the male umukozi and reading. Friday morning…did the same things…until noon! I waited for Erin to get to my Health Center (she had motion sickness and puked right when she got off the moto…thanks for that, girl! :P). We turned around, got on a bus, and headed to Kayonza for the regional meeting. We spent a couple hours at a bar in Kayonza, getting to know the Eastern Province volunteers and getting to know the ins-and-outs of the area. After the meeting, we went to Jambo Beach (on Lake Muhazi), where we hung out until mid-day Saturday. That morning, I had a hot shower for the first time in six weeks. It was perfection.

Here’s some of us next to Lake Muhazi:

My least favorite part of that week was experiencing negativity from volunteers. As trainees, we get a lot of flack because we’re in a new “richer” training site. (Thus, some people think we’re more privileged and will be less able to adapt to our final site conditions.) The way I see it…at the end of the day, we’re all shitting in a concrete hole in the ground. I’m beyond grateful that my training group (Health 6) are so supportive of one another. I feel like we’ve all got so much passion. We’re all incredibly supportive of one another.

On the other hand, my favorite part of the visit was getting back to my host family! I’ve said it a thousand times, but they’re just perfection. I had my favorite meal and warm hugs waiting for me when I got back. It’s always a huge relief to feel so welcome in a place so far from home.